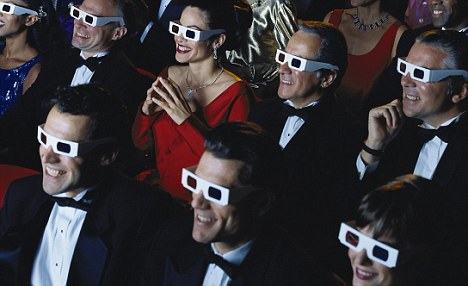 The awards season is upon us – the time when film-makers traditionally congratulate each other on their achievements.

But one thing’s for sure: the trend for 3D films is certainly not one of them.

Despite dominating the release schedule – forthcoming 3D extravaganzas include Harry Potter And The Deathly Hallows: Part 2, the new Batman film The Dark Knight Rises and The Hobbit – the much-hyped form won’t be picking up many gongs at all.

No Oscars here: Despite dominating the release schedule the much-hyped form won’t be picking up many gongs at all

It provides little in the way of added value and even makes some viewers feel ill.

Yet, despite this, it seems like virtually every blockbuster is being shot in this format. There’s no great mystery as to why.

Let’s begin at the beginning.

Opening titles do more than simply tell you who edited a film or designed its production. At their best, opening title sequences operate on the level of pure cinema, translating a movie’s ideas into pure poetic imagery. A movie about the search for a missing girl opens with a title sequence about exposing secrets obstructed from view. A story about a troubled war veteran turned taxi driver begins with titles that mirror its protagonists warped perception through the use of warped visuals of New York City. We learn about the harsh realities of international arms dealing by following the path of a single bullet from factory to innocent victim’s brain.

What makes an opening title sequence particularly outstanding? Bold graphic design and impressive cinematography are important, but how the design and cinematography is used is more important. These fifty films have style and substance. While they dazzle our eyes they’re also busy engaging our brains and our hearts, establishing mood, presenting characters, and introducing themes…

A group of major Hollywood studios lost an appeal in a piracy case in Australia on Thursday.

The Federal Court of Australia voted to uphold a lower court’s decision earlier this month in favor of iiNet, an Internet service provider, which said that the company is not responsible for customers who illegally download copyrighted films…

A group of experts at a technology conference — where the subject generated little enthusiasm — seem to think so.

3D for the home is dead, according to a majority of attendees at the Hollywood Post Alliance Tech Retreat now taking place in Palm Springs.

When the subject of 3D came up at the confab, the audience of about 400 entertainment technology veterans were asked to indicate by a show of hands if they thought 3D for the home was dead — and roughly 80% of the audience agreed with that proposition…

In 1962 Francois Truffaut carried out a series of extensive interviews with Alfred Hitchcock at his offices in Universal Studios.

Before Sideways was a hit film from director Alexander Payne in 2004, it was a novel by a relatively unknown screenwriter named Rex Pickett. The success of that comedy and subsequent enthusiasm of his publisher turned Pickett into a celebrity among wine enthusiasts – to say nothing of California Central Coast winemakers, who thrilled at the surge in tasting-room visits and sales of the protagonist’s favorite wine, Pinot Noir.

So quite unexpectedly, this down-and-out screenwriter, who didn’t get his book published until the movie was being made, fell into the lap of the bitch-goddess of fortune and fame. I well remember running into him at the Paso Robles Zin Fest the following year, when he served as guest of honor and autographed copies of his novel at Justin Winery, a scene he re-creates in his new novel, Vertical.

As you might gather, Vertical is a sequel to Sideways. It follows the further adventures of Miles and Jack, his wayward companion in debauchery, womanizing and wine-guzzling. This time the boys drive through the scenes of their earlier notoriety in the vineyards of Santa Ynez Valley to head for the International Pinot Noir Celebration in McMinnville, Ore., a state whose Pinots can compare with any in the world including Burgundy’s…

Blockbuster’s creditors are preparing to sell the rental chain, according to a Wall Street Journal report.

The company’s investors reportedly could not agree on a plan to take the company out of bankruptcy. They are willing to sell Blockbuster for $300 million.

To put that price tag in perspective, it’s quite a fall for a company that was purchased by Viacom for $8.4 billion in 1994…

Now that the holiday dust has settled, a clearer picture of Blu-ray’s future is emerging through consumer reports and research. While DVD sales are struggling to stay out of the red, Blu-ray is finding its way to the top. The numbers could indicate a more definitive transition in optical media technology…

Not long ago, ambitious young executives at the six major Hollywood film studios maneuvered to get into the home entertainment divisions.

Nowadays, getting assigned to home entertainment is like being sent to the Eastern front. Better to work in theatrical distribution, international, or maybe studio facilities. Recently, I spoke with an executive from one of the big studios who, while discussing the challenges of working in the film industry, noted there was one silver lining: “At least I don’t work in home entertainment.”

The studios’ home-entertainment divisions typically oversee sales of DVDs and Blu-ray discs as well as Internet distribution. But the DVD has long been synonymous with these units for the simple reason that the discs account for the vast majority of revenues. This week, Sony, Time Warner, Viacom and News Corp., reported earnings and their film divisions continue to see falling DVD sales.

For the quarter ended December 31, Paramount Pictures saw a 44 percent decline in home video revenue from the same period a year ago, according to Viacom, Paramount’s parent company (don’t people give DVDs as holiday gifts anymore?)…